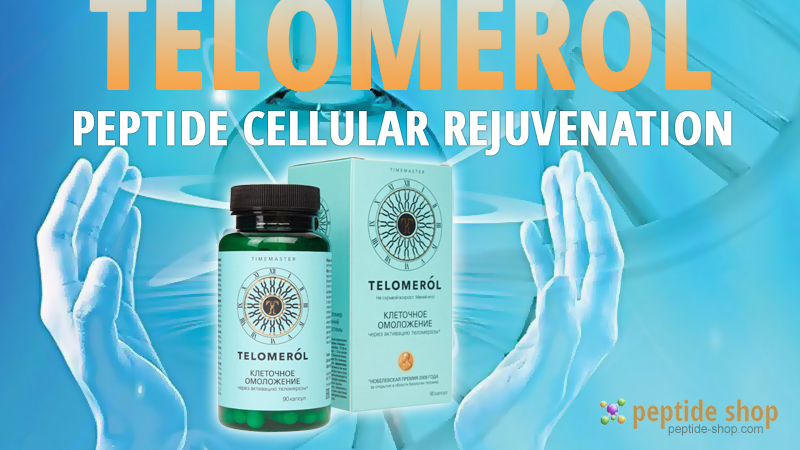 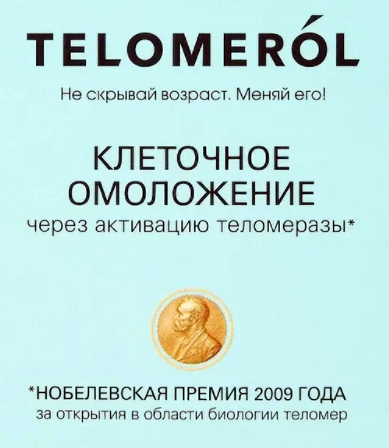 TELOMEROL provides the maximum complex recovery of the human body at the cellular level.

TELOMEROL is a unique combination of three 100% natural components that enhance each other's action: TA-65 molecules and two peptide complexes Epivial and Timovial.

Don't hide your age. Change it!

NOBEL PRIZE 2009 for the discovery of the cellular mechanisms of telomere lengthening, the length of which is associated with the aging process.

TELOMEROL - preparation for the cellular rejuvenation through Telomerase activation.

TELOMEROL T-COVIDEL - protecting the body from infections and restoring the immune system after Covid by activating the enzyme Telomerase.

Telomeres are the end sections of chromosomes responsible for maintaining the integrity of DNA and are a repeating sequence of nucleotides adjacent to each other.

Telomeres play an important role in the process of cellular aging. Each cell of the human body contains 92 telomeres that act as a biological clock. With each cell division, telomeres shorten, reaching at a certain moment a critical level at which the cell ceases to function normally or dies.

The "degree of wear" of telomeric endings reflects the impact on the human body of a whole group of factors (genetic, epigenetic, environmental, etc.), therefore, it is the most accurate indicator of cellular aging. It has been established that there is a connection between the shortening of telomeres and the development of a number of degenerative diseases that lead to poor health and shortened life expectancy.

Telomeres shorten with age, causing our cells to age. We inherited telomeres from our parents, but regardless of telomere length at birth, they become shorter with age. Shorter telomeres have a negative impact on our health.

Shortening of telomeres is the main cause of age-related destruction of our cells. When telomeres become too short, our cells can no longer reproduce, leading to tissue degeneration and death. Certain cells, such as those in the skin, hair, and immune system, are most affected by short telomeres because they reproduce more frequently.

Is It Possible To Stop Aging?

Numerous scientific studies have been carried out that have allowed scientists to unravel the secret of age management and now it has become possible to give a positive answer to this question.

Telomerase is an enzyme that is a ribonculeoprotein complex that synthesizes new telomeric sequences at the ends of chromosomes.

Telomerase maintains the length of telomeres, thus preventing the processes of biological aging and cell death.

The results of experimental studies also point to the fact that the functional activity of telomerase prevents degenerative changes in the reproductive system and brain tissues.

The enzyme Telomerase can slow, stop, or even reverse the shortening of telomeres that occurs with age. The amount of telomerase in our body decreases with age.

There are certainly other ways to preserve our telomere length that will at least help slow down the loss of telomere length: reduce stress, stop smoking, lose weight, exercise more, and eat healthy.

It is based on outstanding hypotheses and developments that were formulated by the Russian scientist Alexei Olovnikov and Nobel laureate James Watson and confirmed in the works of scientists Elizabeth Blackburn (Elizabeth H. Blackburn), Carol W. Greider and Jack Szostak (Jack W. Szostak ), are American scientists announced in October 2009 as Nobel Prize winners in Physiology or Medicine. 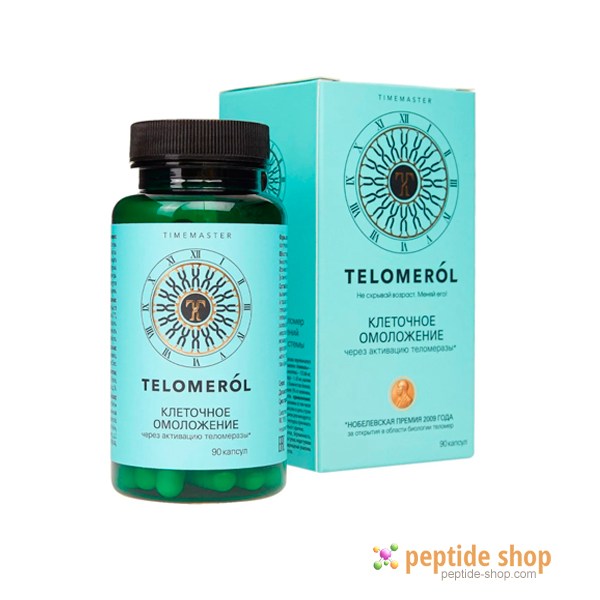 TELOMEROL (preparation for the cellular rejuvenation through Telomerase activation)

TELOMEROL is a unique combination of... 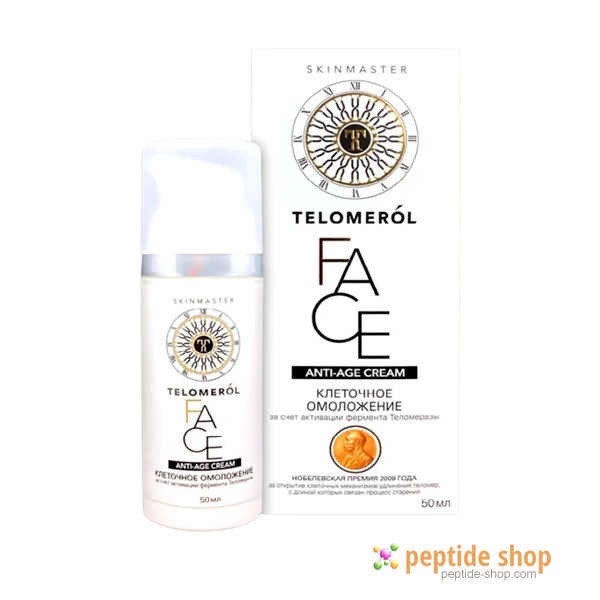 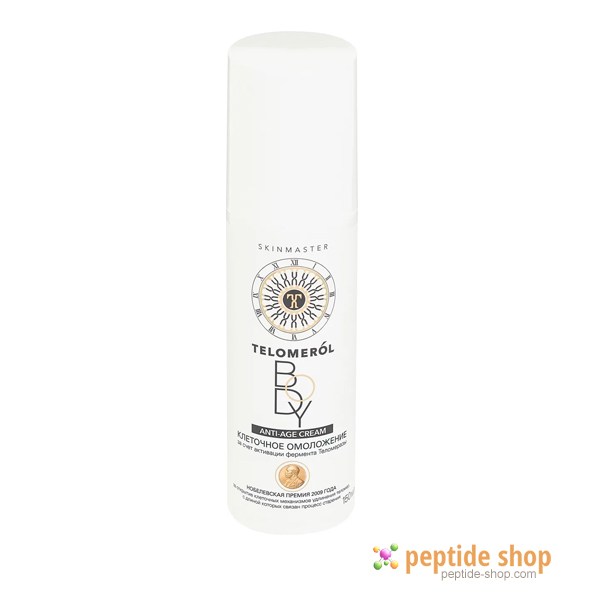 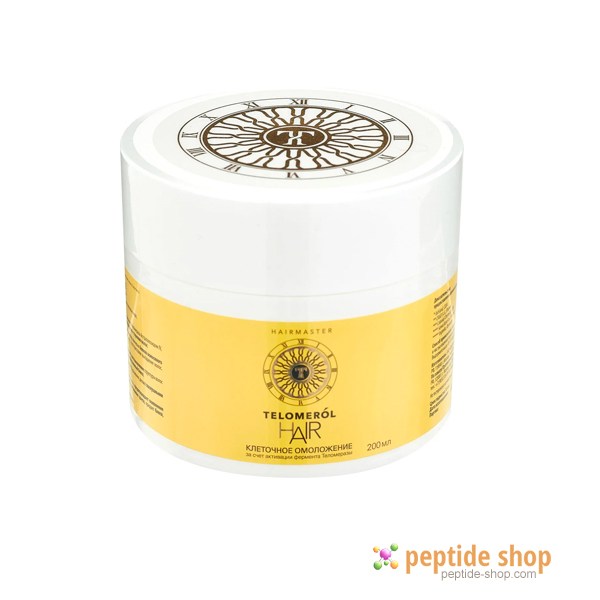 Revitalizing mask for hair and scalp by... 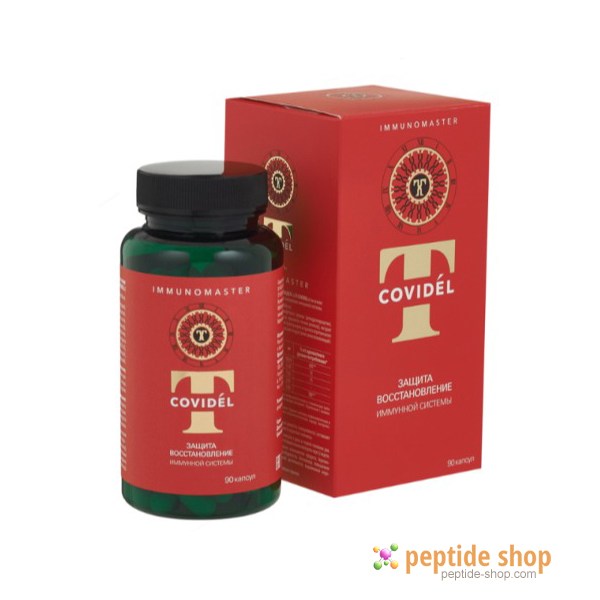 Protecting the body from infections and...