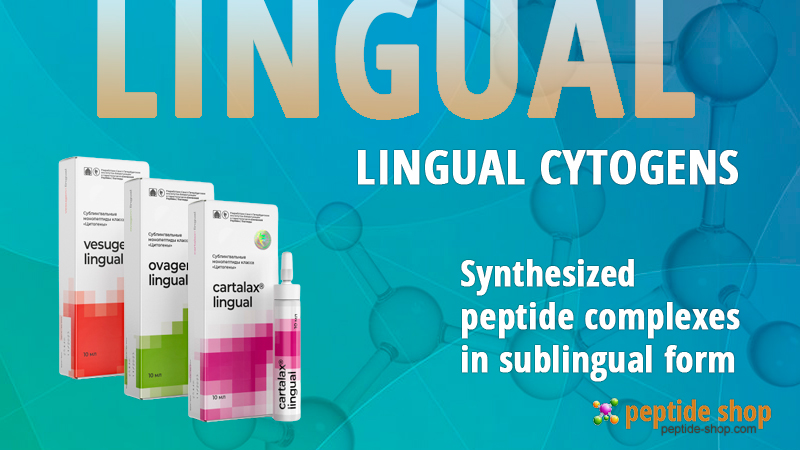 Sublingual drug use is a modern trend in medicine. This method of introducing medicinal substances into the body avoids the negative effects of drugs on the gastric mucosa, accelerates the absorption of active substances into the bloodstream - directly through the oral mucosa. Sublingual peptides are absorbed directly through the mucous membrane of the mouth, that promotes faster penetration of peptides and accelerates their action. In addition, with the simultaneous use of several drugs, the sublingual route of administration of drugs avoids the need to swallow a large number of gelatin capsules, that may be undesirable in case of stomach problems, for example, with chronic gastritis or gastric ulcer and duodenal ulcer.

Dosages of drugs for sublingual use are the same as in capsules: 1 ml of solution for sublingual use contains 10 mg of active ingredient for cytomaxes or 100 mg for cytogens - the same as in 1 capsule. It is recommended to use drugs at the rate of 1 ml of solution per day - 3-4 drops about 2-3 times a day. As a result, the daily dosage is less than in capsules: capsules are taken twice a day at 10 mg (or 100 mg for cytogens) - and linguals take the same dosage of 10 mg (100 mg) per day. But at the same time a similar effect is obtained, since the absorption of peptides occurs immediately, directly in the oral cavity. The most important advantage of lingual preparations is the ability to smoothly and individually adjust the dosage.Who are sublingual peptides suitable for? First of all, people over 50 years of age, many of whom are hypersensitive to parapharmaceuticals. It must be remembered that in people over 50 years of age, taking any medication requires caution. Small concentrations of the active substance in sublingual preparations serve as a guarantee against hyperactivation of regulatory systems, since in old age the body's reserves for bioregulation are no longer large and should not be excessively expanded. So it is the reduced dosage that gives us the desired effect. Physiologically active short peptides are advisable to be used for medicinal purposes at any age to maintain a normal level of metabolic processes, prevent and treat various diseases, rehabilitation after severe diseases, injuries, operations, and slow down the aging process in the body.

LINGUALS were developed by the St. Petersburg Institute of Bioregulation and Gerontology. This is a new line of peptide bioregulators of the CYTOMAXES® and CYTOGENS® classes in sublingual (sublingual) form of application. This method of administration has obvious advantages, which consist primarily in the high bioavailability of the drug and the rapid onset of the expected effect.
The release of linguals was announced at the end of 2019, when we signed an agreement with the St. Petersburg Institute of Bioregulation and Gerontology on the exclusive rights of Peptides as its only official distributor.
We are true to our principles and continue to promote the discoveries of Russian scientists, making their developments available to everyone who is interested in a healthy and active lifestyle. 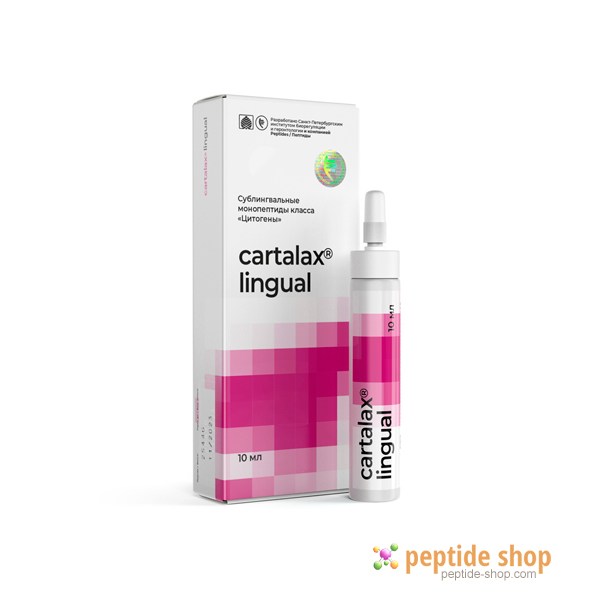 CARTALAX Lingual (peptide for the musculoskeletal system in sublingual form) 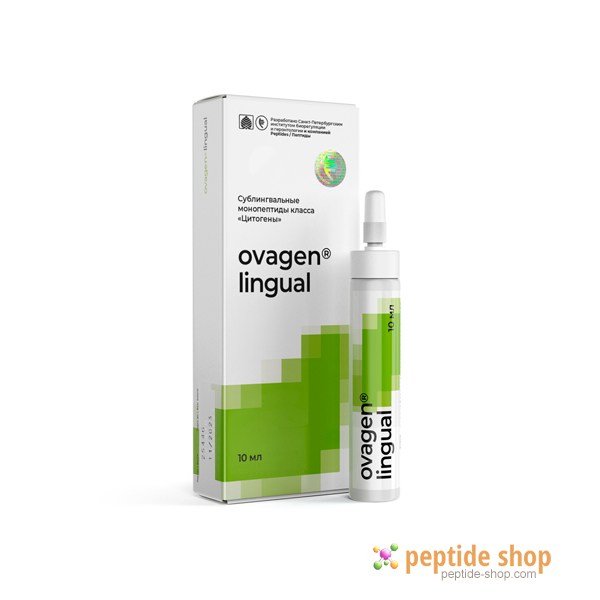 OVAGEN Lingual (peptide for the liver in sublingual form) 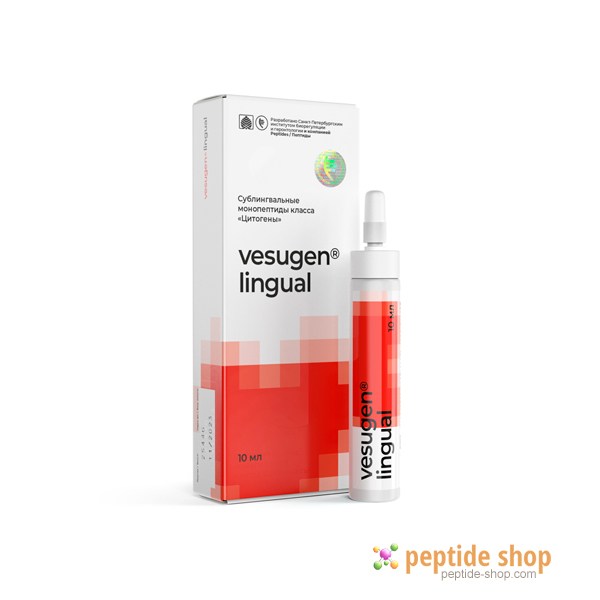 VESUGEN Lingual (peptide for the vascular system in sublingual form) 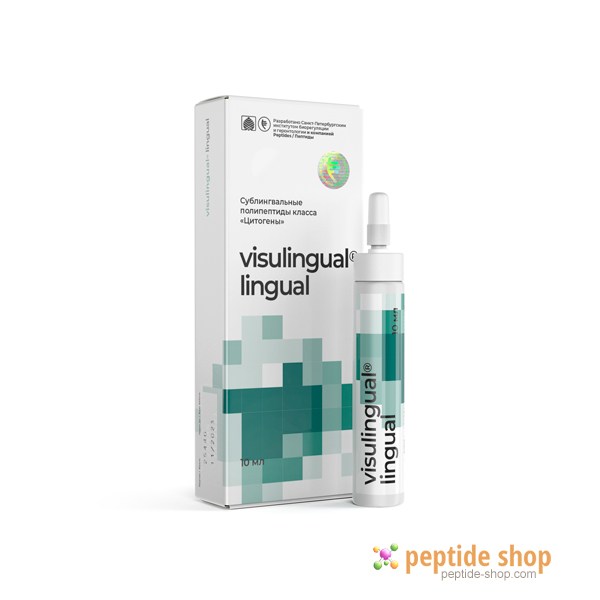 VISULINGUAL Lingual (peptide for the visual system in sublingual form)

CRYSTAGEN Lingual (peptide for the immune system in sublingual form) 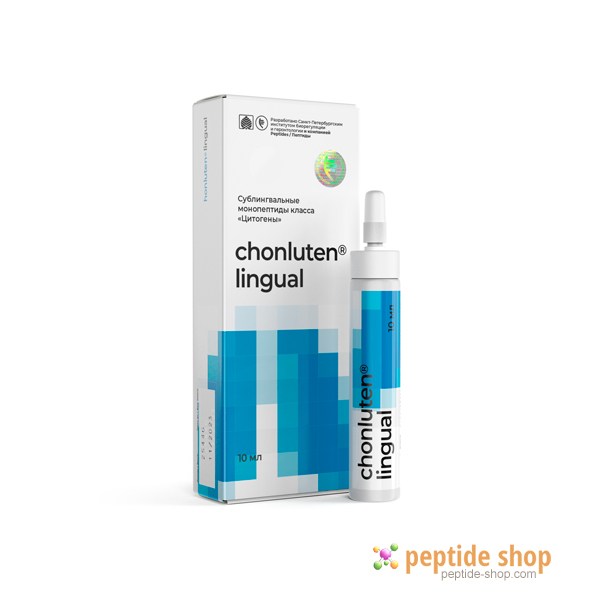 CHONLUTEN Lingual (peptide for the respiratory system in sublingual form) 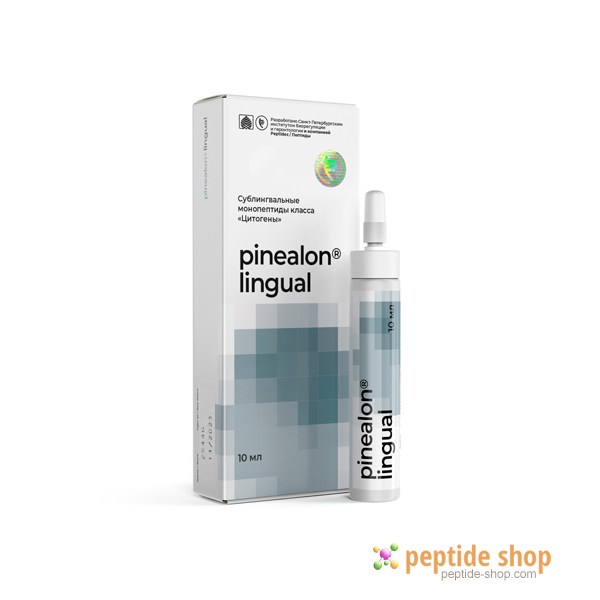